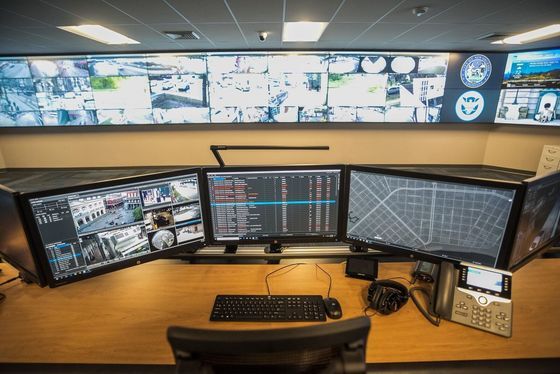 The RTCC was created as part of the $40-million 2017 Citywide Public Safety Improvement Plan, primarily based on technology from Motorola Solutions. Most of the public safety agencies in the New Orleans metro area participate in the RTCC program, including the New Orleans Police Department, New Orleans Fire Department, and New Orleans Emergency Medical Services.

Using live access to view camera feeds across the city, civilian NOHSEP analysts alert police and other public safety agencies to crimes that have taken place, from pinpointing patterns in drug runs to finding persons of interest in thefts or murders. The RTCC manages a system with more than 120 automated license plate readers, plus 340 surveillance cameras, with plans to add up to 250 more. This camera network covers several areas in the city; however, many are concentrated in the French Quarter, a hub for tourists, businesses, and historical landmarks. Citizens and businesses can attach their security cameras to the RTCC through SafeCam, a police department program that has added over 2,600 cameras to the network.

A staff of 18 (as of 2018) work at computer stations and monitor camera feeds from around the city using the Motorola Solutions CommandCentral Aware platform. They access real-time video and archived police records to provide information to local partners, and assist with local, state, and federal agencies.  Analysts view a 19-foot wrap-around wall of monitors engineered by Christie Digital Systems.

"The RTCC ties into the 911 dispatch system and when dispatch gets a call, the RTCC immediately sees the location thanks to the [sic] its cameras and geo-mapping and the information is then shared in real-time with 911 and reported to the officers involved,” RTCC IT manager George Barlow Brown said in a Christie press release. During the 2020 COVID-19 crisis, the 911 communications center began testing Carbyne, a technology that asks emergency callers for permission to gain the exact location of an individual and remote access to their cell phones video camera, according to Forbes.

When the plans for the New Orleans RTCC were first introduced, the Music and Culture Coalition of New Orleans (MaCCNO) argued that the use of the RTCC would create “a blueprint for unconstitutional surveillance.” The Office of the Independent Police Monitor warned the New Orleans City Council that the type of surveillance used by the RTCC would result in abuse, discrimination, and waste of taxpayer dollars. In March 2020, a court ordered the disclosure of the location of 400 New Orleans crime cameras that feed into the real-time crime center.

In 2013, NOPD came under scrutiny for spending $13 million on technology that was later alleged to be ineffective. This included the city’s ShotSpotter gunshot detection program, which was discontinued in 2013 after NOPD was unable to demonstrate that the technology had an impact on crime.

While the RTCC often focuses on violent crime, RTCC analysts also support public safety and emergency operations, such as flooding, fires, and traffic analysis, to guide paramedics through the least congested routes to hospitals. At the request of the New Orleans Department of Sanitation, RTCC-connected cameras were placed in neighborhoods in New Orleans Fifth District to investigate illegal dumping.

Also based in New Orleans, Project NOLA is a non-profit organization founded in 2009 that provides real-time crime center capabilities to local law enforcement agencies, including cost-subsidized pan-tilt-zoom cameras, ALPRs, and gunshot detection sensors. The data gathered from these technologies is transmitted to Project NOLA’s NOLA National Crime Center for analysis and is re-broadcasted to local law enforcement agencies and 911 dispatchers, whose staff can view footage from their mobile devices or computers. In 2010, Project NOLA began the National Crime Camera Program to partner with residents and business owners to create privately-funded camera networks. The program currently includes over 2500 HD cameras and is utilized by 11 agencies around the US.

Project NOLA has partnered with police departments in Louisiana (including the New Orleans RTCC), Mississippi, New Jersey, Alabama, and Pennsylvania. In 2016, the NOLA National Crime Center was moved to the University of New Orleans to encourage students at UNO and Southern University to work with criminologists and law enforcement agencies.

NOLA.com:  Is New Orleans getting a ShotSpotter gunfire detection system?