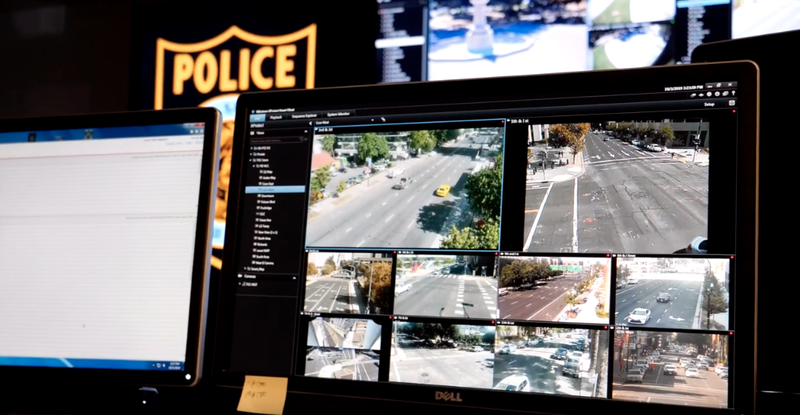 After the Sacramento Police Department (SPD) began installing cameras around the city, officials began to conceptualize a central hub for watching and managing the video feeds. To address this need, the RTCC was established in June 2016 but it did not become fully operational until December of that year. The estimated $500,000 starting cost was funded by the Sacramento Regional Transit District and a federal Justice Assistance Grant. 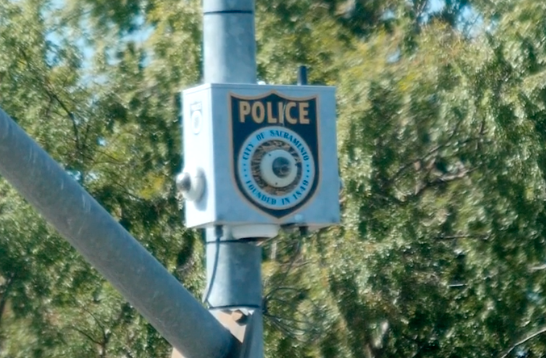 A defining feature of SPD’s RTCC is the network of “Police Observation Devices” (PODs), strategically placed at traffic intersections and public buildings throughout the city. These PODs are generally easily identifiable by the eye: they are metal boxes outfitted with dome-shaped cameras and blue lights that can flash. The front is painted with the police department’s badge and emblem. As ABC 10 reported, 83 PODs were installed around the city as of April 2019, with 24 more to be added by the end of the year. POD video data is purged every two years.

At least 35 PODs are outfitted with automated license plate reader (ALPR) technology. SPD also affixes ALPRs to at least eight of its patrol vehicles and at least two mobile camera trailers as of 2018. That year, SPD scanned nearly 59 million license plates scans, according to public records. This data is fed directly to the RTCC.

Additionally, the RTCC has access to more than 2,000 external cameras throughout the city, including the cameras at the Golden I Center, City Hall, the convention center, and some community centers and city parks. The Sacramento County Department of Transportation shares more than 100 of its camera feeds with RTCC.

The Real-Time Crime Center is housed on the second floor of the Richards Police Facility, along with the Sacramento Regional Transit District’s Security Operations Center. SPD has a wall of eight 55” video monitors, while the Transit District has another wall of four monitors. SPD and the transit district each have sixwork stations.

One of the primary uses of the RTCC is to watch and manage security at large public events like the annual Amgen bicycle race and New Year’s Eve and Independence Day celebrations according to SPD’s 2016 annual report. The RTCC analysts also monitor protests and demonstrations. As KCRA reported, the RTCC has been used for routine criminal investigation, such as a case where a stolen car triggered a POD alert once it entered Sacramento city limits.

The PODs have generated controversy in Sacramento, particularly because of the privacy impact of its license-plate tracking capabilities. Tessa D’Arcangelew, an advocate at the ACLU, told FOX 40 in 2016 that “they basically can record all of our associations and where we go, who we see, where we slept, over time because they record all the location data.”

KCRA 3: So what exactly do those Sacramento police PODs do?